Migration of Birds are seasonal movement for purpose related to climate, food, habitat and most important for breeding. Few migrate long distances, even cross continent and some does it locally.

India is in-route breeding ground for some of migrating birds from North Eastern and Eastern Asia to Africa. In addition to these very extensive movements, there are some who migrate smaller distances governed by local conditions such as temperature, availability of water which can effect upon their food supply. There are factors related to flowering season of certain plants, ripening of certain fruits, availability of insects etc.  Migrating birds prepare for the journey properly timed and on calculated routes, they ensure enough fat deposits which provides enough energy through the journey. Usually the migration happens in large groups. They navigate with good experience of celestial orientation, they also use earth’s magnetic field for their navigation. 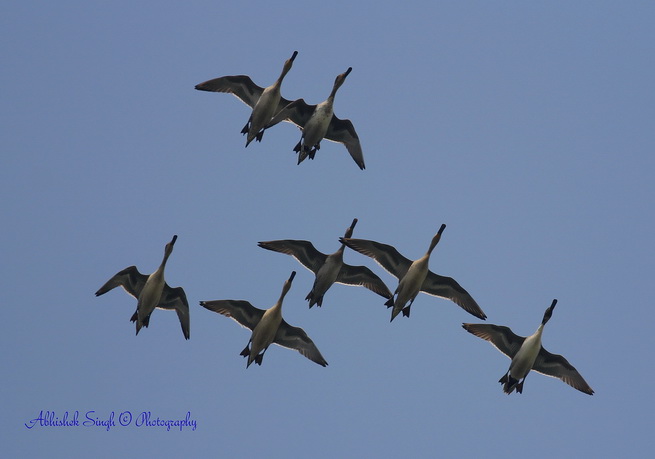 It has been observed that the birds using Central Asian flyway in particular for long distances, cruise on a very high altitude and their velocities varies prevailing their meteorological conditions. The cruising speed for ducks, geese are 70 – 80 kmph and usually they travel for about 6 – 12 hours a day. Its also been observed that few of them even cover more than 800 kms in a day, Plovers even take 3000 kms non-stop flight over open sea and is a winter visitor in India.

Migratory birds not only return to same locality every year for breeding but also often to same nesting sites. Their precision of route is result of imprinted landscapes and landmarks as a result of previous experience while travelling from the age less than a year. How this regularity and punctuality is attained  was mystery ever-since ornithologist started ringing them for study and even had observed that some even return to place as small as a football ground and repeatedly on the same day in consecutive years.